Schoonmaker on the Reserves 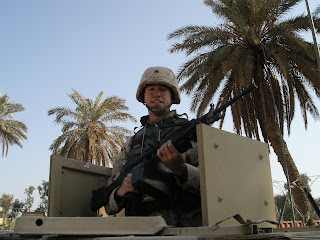 Some of my readers may have seen the Comments made Dec 14, 2006 BY Gen Peter Schoomaker in his Statement before the Commission on National Guard and Reserves.

He said "The changed conditions of warfare have greatly affected our armed services with the significant and sustained demands for Army forces across the globe continuing to exceed the strategy set by the 2005 Quadrennial Defense Review. As it currently stands, the Army is incapable of generating and sustaining the required forces to wage the Global War on Terror and fulfill all other operational requirements without its components - active, Guard, and Reserve - surging together. Fifty-five percent of our Army is in the reserve components, and while our armed forces have made drastic changes adjusting to the post 911 strategic environment, our mobilization policies have not.

As you know, the Army is steadfast in its determination to transform the total force from a Cold War structured organization into one best prepared to operate across the full spectrum of conflict; from full-scale combat to stability and reconstruction operations, including the irregular war that we face today. This effort includes modernization, modular conversion, rebalancing our forces across the active and reserve components, and a force generation model that provides for continuous operations. Through the Army Plan, we are driving change at an unprecedented pace across the force - Active, Guard, and Reserve -to provide the Combatant Commanders with a broad and necessary set of capabilities required to protect the Nation today and tomorrow."

What he has stated correctly is that our policies of the past Reserve and Guard forces were flawed and insufficient for todays needs. But what was not said was that Individual soldier reserve benefits of Retirement, medical, training, insured employer support, remain exactly the same as they have existed since WWII. The Reservist and Guard Soldier is asked to accept more departures from Family (same burden as active bretheren), jobs, and deployments without projected end just as if we were Active Duty soldiers. We are not paid the same - take the travel, lodging, and costs just to attend drills and AT. We have civilian jobs but can we really expect success in a civilian career with more deployments - who in their right mind will hire a Reserve or Guard soldier? Equally the lack of medical care, funds and support to train properly, lack of Fulltime personnel assigned to our units to sustain even minimal administrative, operational and logistics tasks creates enen more burden upon soldiers in Reserve environment. There is insufficient legislation to insure we are not discriminated against in Civilian workplace, and retirement benefits - well live to 60 before you see the first check - thanks to continued Pentagon resistance.

If I was to suggest some things to consider: (king for a day) Many of these would be common practice in a Business setting for fulltime versus part time employees.

1. Open the door wide to Reserve and Guard soldiers that want to join the Active force - say a 5 year term appointment - there are a lot of soldiers out there that would love to be Active duty... they revert back to Reserve / Guard status at the end of tour. Near impossible for mid-level soldiers to transfer part time to fulltime and back. (One Army)

2. Improve efficiency in training Guard and Reserve in IDT - supporting training doesn't mean leave the entire burden of planning, resourcing and scheduling to a part time chain of Command. Do more than offer just a range, etc... for IDT as well as deploying units.
3. Double or triple Fulltime staffs at Reserve and Guard units. As a former Mil-Tech I can tell you much is not done for soldiers in administrative tasks and planning suffers with lack of manpower at Reserve unit for 28 days every month.

4. Retirement Benefits - offers such as the 1 Year earlier retirement for each year in Combat Zone are a great start - also consider 1 Year earlier for every 2 years served beyond 20 Years for Guard and Reserve.

5. Offer either tax break, reimbursement or vouchers for soldier costs to attend drills at IDT location. Consider more mandays for IDT - MUTA 6 drills for up to 60 assemblies a year instead of the current 48. If your really serious about training - offer vacation training packages in Summer and over holidays which carry pay and benefits or promotion boost.

6. Pay for Bi-annual Medical and Dental visit with accompaning Mobilization status review - make it required for continued Reserve Membership. (this will not be cheap, however no one has a handle on who is available without it)

7. Family Support - nice that there are so many great volunteers, but more resources should be available to Family Support groups other than one contractor 3 states away to collect paperwork as a program. How about giving them postage funds as a start?

8. Employer Support of the Guard and Reserve - starting with the Federal Government (one of the largest Reserve and Guard employers) consider incentive and/or tax breaks for hiring an active Guard or Reserve member. Legislation to prevent discrimination for Veterans and Guard and Reserve soldiers is needed.

9. Many Guard and Reserve Soldiers opt out because their civilian live change (Move, new job, changed location, etc) We lose many good soldiers because they cannot take a leave of absence from Drills when truly needed - they will unsat out, leave at end of ETS because they have no other viable option. (IRR is not a complete solution to this problem)

10. Rigorously rid the force of any admin policy or practice that continues the separation of Active forces from Guard and Reserve soldiers.
- Issue a DD214 for departing Guard and Reserve Soldiers
- Grant access to Military MWR facilities on an equal basis to Active and Reserve
- Training ranges, facilities, logistics - one force
- Pay for travel/ training opportunities - eliminate separate systems for training - offer both components training necessary to maintain job skills, etc using one standard.
- Fulltime or Parttime - promotion when you meet the criteria - equal rank for equal skills and education.
- reinvent Active duty mentoring for Reserve units... Marine Corp model for Reserve units.

Of course none of the changes I would seek would be cheap, but we offer 50K a soldier to gain each new soldier to the force while really not addressing the 500K soldiers assigned to the Guard and Reserve - change won't be easy... but keeping just 10000 Reserve and Guard soldiers for the mission is cost effective in comparison. I'm speaking here about the Army Reserve and National Guard, but I'm sure Navy, Marines and Air force reserve components can have similar corrections completed to gain more from this force. 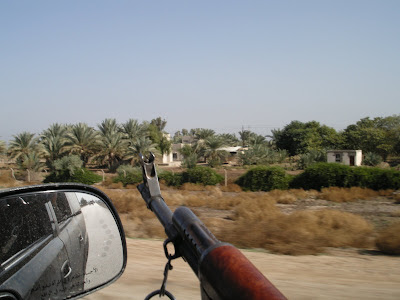 Recently I reviewed an article in the Army Times describing the need to improve the quality of soldiers assigned to the Iraqi Military and Police training missions. The article inferred that comments from the current Commander related that quality of instructors in the past was somehow deficient. It was based on comments attributed to Brig Gen Dana Pittard, Commanding General of the Iraq Assistance Group.

Well, he is blunt.... some of the problems he notes are recurring and its not good to hear that our efforts in 2004-2005 were somehow not up to grade (In his opinion). He makes good points that the effort must be supported as the priority of effort for our forces in Iraq. He is calling the right program to alert the military establishment to support the effort. However his criticism is a little too directed at Reserve Soldiers in his note that that is who he has fired and insinuates that they are somewhat to blame.

As a Reserve soldier assigned to Iraq to the task of training Iraqi Military I have to note: The truth is I didn't ask for my assignment - an active duty force sent me to MNSTC-I to be a part of the burgeoning effort there to get the Iraqi Secuity forces established. Active Duty staffs planned the deployment of about 700 individual soldiers from a Reserve Training Unit with 30 days or less training to a warzone. My peers from the Army Reserve were similarly thrown into the most austere and unsupported conditions imaginable to get programs, training, installations in place to train the Iraqi Army and Police. My biggest obstacles to getting resources for Iraqis was a prevalent attitude to take care of Coalition needs despite any requirements the Iraqi forces or their mentors at the time had. I had the opportunity to cross paths with many coalition units as the Iraqi Installation Plans officer responsible for the stationing of all Iraqi Military and police units in Iraq.

I could go on at length to describe the challenges - the picture above is one from the early days in country when we used a standard Chevy Suburban (No armor) and AK-47s to get around an do our mission. We were not an intrinsic supported element of any coalition unit in theater and ranked slightly above our Iraqi counterparts for assistance in supplies, equipment to do the task of building capable Iraqi forces from the ground up. We recieved the greatest support from Foreign coalition partners (Polish, Ukranian units in MND-SE) because they had no preconcieved notions of doing anything but supporting rebuilding efforts.

Now with 20-20 hindsight, the new commander of the Iraqi Assistance Group will do a better job - I hope so .... and I hope he is better supported to what has now become a main effort... lets hope it is not too late. In his interest to gain support to the task, he should tred lightly on the efforts of those embattled predecessors that pioneered the effort that he manages today.
Posted by Stan68ar No comments:

Nice to be recognized 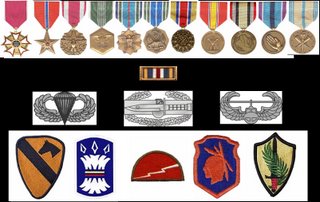 Well - I was suprised the other day to get a call - here I have been retired for 6 months and I got a packet with my retirement award in the mail. Also included were a retirement certificate and an American Flag.

Those of you that have served any length of Time in the Army Reserve know just how slow or non-existant the awards programs are in overworked and understaffed Reserve Units and I was no exception. Thats not to take away from the award and the considerable effort exerted by the FTS personnel... not at all... after all I served as a Military Technician for 18 years and I can testify how much work is piled on the few fulltime personnel in a typical reserve unit. I 'm merely expressing my pleasant reminder of the brotherhood that is a Reserve Unit when I see the package arrived and I opened it.

I was given an Legion of Merit for 24 years service which is quite an honor. As always- dear readers, it caused me to reflect back upon how it came to pass that that stupid 2LT (Butterbar) actually progressed in his career to the point that the Chief of The Army Reserve signs his retirement award in recognition for a job done well. Sometimes it seemed painful, lonely, adventurous, exasperating but above all it was service to country and that meant more than any ribbon can really convey.

I wish to use this forum to note that many do not get awards that are more deserving. Some recieve awards based upon flawed criteria, some are never submitted. In every case I have known, the award is not the sought commodity for the soldier.... we all seek the longer lasting and more satisfing thanks for serving... in good times and bad.

Next time you see or talk with a soldier... just that little comment - thanks for serving, appreciate your sacrifice, etc... means more than any medal/ award/ ribbon..... after all, we work for this great country and the genuine appreciation expressed by the american public is more powerful than a room full of generals with buckets of decorations.
Posted by Stan68ar No comments: