To compete in the global information war played out on Web sites and e-mail, soldiers in Iraq should upload videos of their experiences in the combat zone to YouTube and post their personal stories online.

As you have read here – there is a significant counter position to allowing such free reign to Blog sites, video sites and the like within the walls of the Pentagon. General Caldwell has clearly grasped that the digital internet era warrants a relook at the resources we have in soldier Blooging. Therein lies the potential to have a sustainable information warfare counter to the information battle that is being waged across the internet spectrum.

He suggested in the article that unit leaders be given camcorders to document combat operations and daily life. He grasps that there is an importance in being able to immediately access an audience of millions. Noted in the article is the fact that there are MilBloggers out there willing to overcome the red tape imposed by the August 2006 Pentagon memo which forbade personnel from placing any information on public Web sites unless it was reviewed for possible security violations and approved for distribution by commanders.

I have noted here previously that it is a struggle to overcome bureaucratic reluctance to allow blogging within the military establishment. The resistance extends event to retiredreservist at times as a result of the Pentagon restrictions. These restrictions quantified in the current rules are subjective to to a wide range of interpretation. Within the milblogging community this may be translated to absolute censorship or open latitude for bloggers. The restriction on using military computers (often the only machines available in theater) further suppresses the good message from our soldiers in the field.

General Caldwell has got it right with regard to the need to relook the current policy and improve our counter message to that of the enemy. We must realize that our soldiers come from a great cross section of the country they serve and as a result are best positioned to influence the masses on notion that we are doing good work.
Posted by Stan68ar No comments:

Read in yesterday’s Stand-to magazine about The Army’s program called The Community Based Health Care Organization (CBHCO). This program allows a recuperating Reserve Component Soldier to obtain services from medical facilities near home, while remaining on active duty.

CBHCOs provide Reserve Component Warriors in Transition (WTs) high-quality health care and administrative processing through nine CBHCO units, managing more than 1,300 Soldiers, who live in all parts of the country.

This is a great leap forward in treating and caring for Reserve and Guard soldiers that allows application of localized comprehensive care to Guard and Reserve soldiers. Now there are quantified instructions address duty status, reassignment actions, personnel accountability, evaluation reports, promotion, pay, release from active duty (REFRAD) procedures, retirement, and discharge for Soldiers who fall into various categories in deployment medical care. The rules cover care for soldiers who fail pre-deployment screening, become injured or Ill during deployment and post deployment care.

Based upon personal experience this is a vast improvement over the medical care available as recently as 3-4 years ago and reflects the Army medical and human Capital elements recognizing the deficit and improving upon the delivery of medical care to Reserve and Guard soldiers.

Its early, but I think we have a course for better care of our Reserve Component soldiers thanks to their efforts.
Posted by Stan68ar 1 comment:

I was reminded yesterday of what may seem a minor issue when looking at an LES of a deployed soldier brought to me at my Veteran's association. Seems the soldier’s parent did not understand why the status for the Reserve soldier reflects active duty for training (ADT) when the soldier is in fact hardly training, but rather serving in a combat theater at the moment. I noted my own LES from my deployment reflected AT/ADT when I was in Iraq as well.

I imagine a bureaucrat in Army can tell me the reason for the coding to reflect AT/ADT when in fact a Reserve soldier is on Active duty. But try to explain that to veteran organizations, family members and others. Also note that at least for me, and I suspect other Reserve soldiers, its more of the “your still a Reservist” mentality creeping in so that even you pay document cannot note that you are on Active Duty and not some “training period”.

It may seem like a little thing – but it is an irritant. How about we change the status to reflect active duty when appropriate on a document we send to about 70000 soldiers that are deployed every two weeks and note they are not just training. It is just a little thing.
Posted by Stan68ar 1 comment:

My Baby is a soldier - update

She has since been deployed with the unit and is stationed at a stateside training base for a couple months training prior to deployment. She receive her alert, and orders for Mobilization on a Friday and was on the bus to the training site on the following Tuesday. As you can imagine, the weekend in between was fast paced with packing gear and getting all the requisite actions complete before shipping off.

I wrote about my daughter’s progress through the training process before and I remain in marvel of the system that transformed my little Girl into a soldier.

I visited her unit the 744th MP Battalion, and immediately discovered soldiers and Officers I knew in various previous assignments – as they say the Army is a small place at times. Even as an old salt, I was impressed with the efficiency, team atmosphere, competence and determination of the unit’s leaders and members. They were getting things accomplished to move out on their mission.

I also met many other families at the 744th Reserve Center and know it is a tough thing for them to say farewell for a while as their sons, daughters, spouses and partners depart. I don’t know to what extent that many families know of the task that is ahead of the unit – the hurry up and waits, training, movement and deployment.

I know from my own experience, just as it is for my daughter, that the activities for the deploying unit are charged with apprehension, trepidation but also a sense of pride. For unit members are now called forward as soldiers to serve their country. The basis for this service goes back to the very foundation of the country when then as now, citizen soldiers answered the call.

I will write again about this unit – one and all embody the term – soldier strong.
Posted by Stan68ar 1 comment:

PV2 Smith has been attending annual Training since her return back to Pennsylvania with her Reserve Unit. She arrived and discovered that her unit was preparing for deployment soon overseas, however she was at the time excess and not scheduled to depart with the unit.

Today that has changed - she was informed that she will be departing with the unit next week for training and subsequent deployment overseas. She called me as her father and we discussed the enormity of the implications for her life, now the delay in starting school and the work that must be done to prepare for deployment.

Many Reserve soldiers are similarly faced with the daunting task of completely changing their lives to prepare for and complete training and deployment. It is an emotional event in the life of any soldier and my 18 year old daughter is no different. Her friends, extended family and community don't really understand the calling, the feelings or the apprehension of going away for a year to a war zone to serve your country. Its a committment that we as a country don't always reward or recognized in proportion to the all out effort entailed by the soldier to serve with honor.

I knew this day was possible, and in light of the statistics for Reserve soldier deployments, expected it would occur soon. It is no easier having experienced the event as a soldier myself to see my little one getting ready to go...the only consolation is I know she is Army Strong - something that is more than a saying - it is a way of life.
Posted by Stan68ar 1 comment: 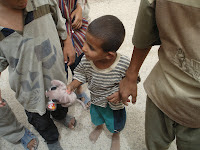 As a member of GEN Petraeus’s MNSTC-I staff I had the opportunity to develop relationships with many Iraqi people…at the Ministry level and out in the countryside. A tenet constantly reinforced in every transaction, meeting and event in MNSTC-I was the partnership aspect in creating conditions for success in Iraq.

I happened to receive a case of Beanie Babies from a co-worker stateside while in Iraq and took the opportunity to hand them out as I did to this little guy. It seemed natural to treat the Iraqi’s with respect and friendship in the environment at MNSTC-I. GEN Petraeus knew we often gave stuff out at the various sites…he demanded fairness and partnership with Iraqis and their Leadership for all members of the command.

If we could apply his model on a larger scale – the ability to add a little joy and strength to a relationship - we just may prevail.
Posted by Stan68ar No comments: