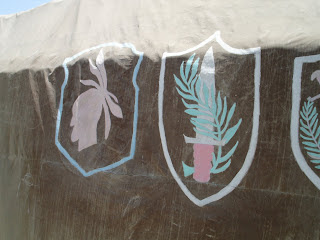 Many civilians do not know the tradition of the combat patch. This is a patch placed on a soldier’s right shoulder. I realize that my Daughter’s unit should be handing out wartime or “combat” patches and I thought I’d offer a little primer on something that most Army soldiers know about in this day and age.

In the Army’s regulatory language

Shoulder sleeve insignia-former wartime service (SSI–FWTS)
a. General. Authorization to wear a shoulder sleeve insignia indicating former wartime service applies only to soldiers who are assigned to U.S. Army units that meet all the following criteria. Soldiers who were prior members of other Services that participated in operations that would otherwise meet the criteria below are not authorized to wear
the SSI–FWTS. Wear is reserved for individuals who were members of U.S. Army units during the operations.
(1) The Secretary of the Army or higher must declare as a hostile environment the theater or area of operation to which the unit is assigned, or Congress must pass a Declaration of War.
(2) The units must have actively participated in, or supported ground combat operations against hostile forces in which they were exposed to the threat of enemy action or fire, either directly or indirectly.
(3) The military operation normally must have lasted for a period of thirty (30) days or longer. An exception may be made when U.S. Army forces are engaged with a hostile force for a shorter period of time, when they meet all other criteria, and a recommendation from the general or flag officer in command is forwarded to the Chief of Staff, Army.

What all that really means is that a soldier may put a patch on their right shoulder for providing service that takes them into a hostile foreign land and lays down a whole year away from family, friends, civilian pursuits and leisure pursuits.

The danger in the wartime service is evident when you look at the number of soldiers we mourn today from operations Iraqi Freedom and Enduring Freedom. Take nothing away from this deployment and these soldiers. They face incoming rockets and the threat of [roadside bombs] on a daily basis, and remember, success or importance of a mission is not calculated by number of soldiers lost in the mission. Each soldier here is fulfilling a duty, serving their country and being a part of history.

So many soldiers go through a brief ceremony after a period in country which goes something like Attention to orders, “Having proven themselves under enemy fire while serving in Operation Iraqi Freedom, (these soldiers) are hereby awarded the unit combat patch forevermore to be worn on the right sleeve in testimony of their selfless service.”

With the patch – the soldier so presented has a significant symbol of the fact that the nation honors them, fellow soldiers honor them, and that’s why they are given a patch to remember forevermore that they were a part of a combat or wartime service effort and sacrifice. I hope that the newest members of the Army receiving a combat patch reflect on the sentiment of thanks that this old soldier notes with the passing of that small patch of cloth.
Posted by Stan68ar 2 comments:

Update on the B 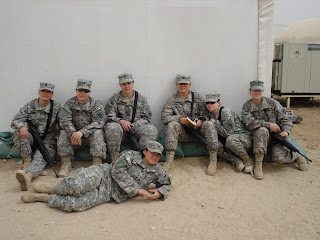 My daughter who is nicknamed "b" sent me a couple pictures from when she was in Kuwait. These shots were taken while she and her unit were enroute to Iraq. She has been in Iraq for nearly two months now and remains in good spirits like she was when these shots were taken. Perhaps she will log on and comment with the nicknames of al the other soldiers in the picture. B is the soldier second from the right about to put her muzzle in the dirt....B!! watch that!!! .... well I was a soldier, I can't help myself.

From all accounts her unit, the 744th Military Police Battalion, is serving with distinction in its assignment in Iraq. The members have every reason to be proud of their accomplishments.
Posted by Stan68ar No comments:

Not that I get pleasure pointing out the failures of another federal agency, but I have been reading about the Class action suit being filed against the VA over the agencies treatment of PTSD. The VA for its part had an employee that had an e-mail sent to clinicians suggesting they refrain from giving a diagnosis of PTSD. The E-mail goes on to state the VA does not have resources to test adequately to determine PTSD. Veteran's for Common Sense is taking on the VA over the PTSD treatment of our vets.

The VA fails in providing testing for other ailments - remember Gulf War Syndrome... or how about veteran's exposed to Uranium dust and destroyed vehicles in Iraq?

There is a systematic failure in the Department of Veterans Affairs (VA) programs designed to address the medical and overall readjustment needs of war veterans. There is a great communications failure between DOD and the VA for medical records. There is no plan to gather usable data and monitor the 1.5 million deployed Operation Enduring Freedom and Operation Iraqi Freedom (OEF/OIF) service members as they return to duty or reintegrate into civilian society. The continued incomplete process of reintegrating soldiers, especially Guard and Reserve Soldiers is an indicator of continued process deficiencies.

DoD currently requires service members to answer a limited questionnaire to determine if they need to be referred for treatment upon their return from a combat theater. Soldiers are typically rushed to return home after a deployment and do not necessarily give these questions sufficient attention, nor have they changed gears from mission first mentality.

I returned from OIF as a Reservist in 2005. DoD had no provision for me or any member of my unit to obtain physicals or evaluation. As individually mobilized Reserve Soldiers we were swiftly processed, lock step, over 4 days at Ft. Bliss and shipped home. I went to the VA about a month after my return to civilian life (had to take leave from my civilian job) and in the course of trying to get my initial medical screen was assaulted by a Phlebotomist at the Clinic. Literrally I was bum rushed to the VA clinic's front door and have not been scheduled for treatment since. Why - because I was mistakenly scheduled for a Friday of a three day weekend and this infuriated the VA employee. So the Bottom line - no medical exam, check-up, evaluation, etc... for this returning combat veteran Reserve Soldier. My story is not unique and many others can be found online... DoD and VA net effort to identify, treat and reintegrate is near zero and broken.

The VA still has a reported rise in the backlog of more than 100,000 claims. The continued absence of consistently prompt mental health referrals as part of Post-Deployment Health Assessment process plagues effective identification of health needs. Half as many members of the Guard and Reserve file disability claims as compared to active duty veterans and these claims are rejected at twice the rate. Frankly, after 24 years in the Army Reserve, I don’t have a clue how to even start a claim, nor is anyone inclined to step up and assist as I’m now retired.

I believe its time to insist that VA and DoD better coordinate efforts and become more proactive in working with veteran's to transition to VA system. Efforts to effectively share medical information are underway but still far short of what is needed. My medical records from the mobilization were unceremoniously put in an envelope and mailed to my house… no one reviewed, followed up or checked them. I could not get a physical or even medical attention at Bliss within the month I returned as facilities were overwhelmed. The effort at that post at the time being nearly completely invested in those getting ready to deploy. To be fair DoD should conduct mandatory in-person physical and mental health exams with every service member 30 to 90 days after deployment.

The current system still reflects a bias that was relevant before Guard and Reserve soldiers became part of an operational reserve. Little has been done to change the support structure for Reserve component unique challenges in either the VA or DoD. Efforts to integrate the resources of DoD and the VA must be continued beyond sharing medical data to include a true plan of action for citizen soldiers health care in light of the greater reliance of the nation upon their services.
Posted by Stan68ar No comments: