We just celebrated Veteran's day and it is a good time to reflect that some Veteran's are not well off. I'm refering to Homeless Veterans. Homeless veterans are a group often overlooked in this country. I really did not know the scope if the issue with homeless veterans and always assumed that veterans were a cross section in society and were homeless at the same rate as everyone else.

I have read into the issue and found the statistics a little discomforting as a soldier and thought I’d share some with you in the hopes that we all work to never leave a former soldier behind. From the Veteran’s Administration site (http://www1.va.gov/homeless/)

In these statistics one out of every three homeless men has worn a uniform and served this country. The U.S. Interagency Council on Homelessness and the Urban Institute, 1999 provides that roughly 1 in 4 of all homeless people in America are veterans.

As a former soldier these statistics tell me that we have former brothers and sisters that served that need our help. The statistics bear out that we may not be doing enough for some veterans. The VA has some programs to assist veterans, but are they adequate for the surge that will follow the latest war…. I don’t know – at the moment I do a little bit – if all of us veterans did the same I know we would be following the soldier creed – I will never leave a fallen comrade - and perhaps we can make a difference.
Posted by Stan68ar 3 comments:

Sometimes we make a difference 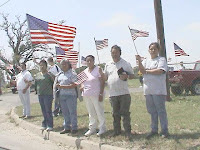 The loss of a loved one in Iraq must be a terrible event... apparently we can ease the burden though the simple act of recognizing the service...an article I recieved

What follows is a message from Vicki Pierce about her nephew James' funeral (he was serving our country in Iraq):

"I'm back, it was certainly a quick trip, but I have to also say it was one of the most amazing experiences of my life. There is a lot to be said for growing up in a small town in Texas . The service itself was impressive with wonderful flowers and sprays, a portrait of James, his uniform and boots, his awards and ribbons. There was lots of military brass and an eloquent (though inappropriately longwinded) Baptist preacher There were easily 1 000 peop le at the service, filling the church sanctuary as well as the fellowship hall and spilling out into the parking lot.

However, the most incredible thing was what happened following the service on the way to the cemetery. We went to our cars and drove to the cemetery escorted by at least 10 police cars with lights flashing and some other emergency vehicles, with Texas Rangers handling traffic. Everyone on the road who was not in the procession, pulled over, got out of their cars, and stood silently and respectfully, some put their hands over their hearts.

When we turned off the highway suddenly there were teenage boys along both sides of the street about every 20 feet or so, all holding large American flags on long flag poles, and again with their hands on their hearts. We thought at first it was the Boy Scouts or 4H club or something, but it continued .. for two and a half miles. Hundreds of young people, standing silently on the side of the road with flags . At one point we passed an elementary school, and all the chil dren were outside, shoulder to shoulder holding flags kindergartners, handicapped, teachers, staff, everyone. Some held signs of love and support. Then came teenage girls and younger boys, all holding flags. Then adults. Then families. All standing silently on the side of the road. No one spoke, not even the very young children.

The military presence..at least two generals, a fist full of colonels, and representatives from every branch of the service, plus the color guard who attended James, and some who served with him .. was very impressive and respectful, but the love and pride from this community who had lost one of their own was the most amazing thing I've ever been privileged to witness.