The B is at work

The B is my daughter who is assigned to the 744th MP Battalion and is currently working at Camp Cropper in Iraq. The 744th is slowly settling into its routine and environment at that facility. All reports seem to be good for the unit.

B is finding that she is faced with some of the dull routine and tedium that accompanies such an assignment. As her father I am glad it is so boring and hope it stays quiet for her throughout her tour.

She is otherwise in great spirits and is doing well.

Several of my readers have inquired about her address and I will provide that for those of you that I know so you can drop her a note of encouragement. She likes getting the mail as it is a little bit of home in that locale so far away.
Posted by Stan68ar 2 comments:

Next Commander in Chief

Well its finally Primary time here in Pennsylvania and the focus is largely on the Democratic candidates running neck and neck. We have been bombarded with ads from both addressing the ills that will be corrected and the usual political promises one would expect prior to our vote.

Much of the focus in this election is centered on the soured economical conditions, the high price of petroleum and the need to change Washington Politics. At the moment there is little in the way of focus on the War in Iraq from most of the Candidates and I understand that the message is currently being catered to what is formost on most American minds here stateside.

There is no course, experience, or training that can completely prepare someone for the duties as CinC. There is much to learn in being a capable leader of the largest and most capable military this world has ever seen. The task is immense - given the current worn but servicable condition of the services, the need for transformation to address future needs, the inevitable budget reductions and balancing act the task may even seem impossible.

The affairs of the Defense Department cannot be managed by one individual of course and the CinC must rely on the judgement and experiece of senior Civilian and military leaders. In the coming days we will get to observe the team assembled to sustain the capabilities of the Military. Lets hope the candidate selected takes the task as CinC as one of their most important and selects a winning team... the cost of failure is significant.
Posted by Stan68ar 1 comment:

Military.com has a recent article about Expanding Reserve Early Retirement

Reservists and National Guard personnel mobilized for war and national emergencies for periods of 90 days or longer since Sept. 11, 2001, could see their age-60 threshold for receiving reserve retirement lowered under a bill (S 2836) introduced April 9 by ten Republican and Democratic senators. Read all about the pending legislation here

This would push back retirement for all mobilized Reservist if passed. As it reads currently this does not discriminate for Reservists sent to Iraq or those mobilized under GWOT orders that remained stateside. All would have their retirement date moved up 90 days for each 90 days on active duty.
Posted by Stan68ar No comments:

Where in the world is the B? 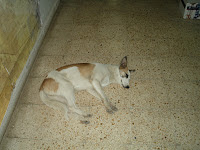 To continue updating my few readers on the status of my daughter I can offer the following details. BB is her nickname and I will use that from here forward to identify her status.

B is in Kuwait as of this writing – with her unit in additional training (she says for the 3-4th time they have been doing these tasks). The routine is tedious and “boring” and there is a lot of “lets get to the job” sentiment in the unit. She has been a nomad for the last several days. As she put it “she would like to sleep on the same cot twice in a row” She is living thru a very transient period that most everyone going to or from Iraq has to endure.

I expect that she and her unit will move to their final assigned location shortly and there will be a little bit more stabilization in the routine. The sleeping on cots may not change much over the course of the next year – the living conditions are Spartan in country. She continues to participate, as all of the soldiers in her unit are, in a great sacrifice of personal comfort and freedom to contribute to the Army’s mission. Many don’t realize that in addition to the dangers of the task that soldiers must endure a standard of living and conditions for 12-15 months that are akin to imprisonment in this country.

A loss of personal freedom to meet the tasks of our democracy, freely taken up by a volunteer force of a few, for the good of all.
Posted by Stan68ar No comments: 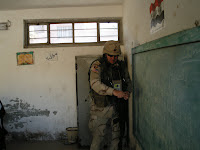 In what military establishment can you serve as a soldier for 20 years, required to be prepared for deployment and active duty and not be issued a record of your service at your departure? How about a list of your awards accrued after completing your 8 year contracted service? Answer – In the Army Reserve.

You see dear reader – if you do not have an extended active duty period in the Army Reserves you do not receive a DD Form 214 which is a Certificate of release or discharge from Active Duty. Seems logical – the form applies to active duty service. As a Reserve Soldier I received one after 22 Years Reserve service only because I was mobilized…but what if I had not had the active duty… what then? Well the answer is not good…I could not produce a document that detailed my years of Reserve service, my awards, badges, specialty information, grade or character of service. In fact the awards and Reserve service after my last active duty tour, including a subsequent short active duty assignment are not documented in a single source certificate from the Army Reserve.

I’m not alone – every year thousands of Reserve soldiers finish their Reserve commitment and do not receive any certificate or official document that provides the information contained on the Active Duty release document. Soldiers retire after 20 years and cannot provide an accepted document that details the Reserve Career they held. A soldier serving a typical 8 year commitment to the Army Reserve today will receive a DD214 after Basic training and no other document for their service… 7 years of service is not certified, registered, noted except in a personnel file in a file cabinet somewhere. Reserve soldiers cannot provide veteran’s organizations, employers or family a certificate that lists their service both active and reserve that is completed at the end of their tour.

It is about time that we consider a Certificate of Release or Discharge from Reserve Duty for Reserve soldier service. A single certificate that acknowledges a soldier’s achievement over the course of their service. The existing DD214 format would be a great start. The worth of the acknowledgement that the Reserve soldier has a document that provides evidence of their service is significant… especially to that retired soldier …required to be always ready… that didn’t have the opportunity to deploy late in their career to get such a document.
Posted by Stan68ar 11 comments:

Recently I received a copy of a letter from a local Reserve Unit Family Support Group that was addressed to my American Legion Post. It seems this Reserve unit has endeavored to enlist the support of the local veteran’s groups for Family support activities.

I have never had contact with this particular unit before, but I thought their approach to enlist help and assistance by introducing their Family Support group to veteran’s organizations was a good idea. It so happens that our American Legion post like many others has a number of programs and events that can be useful to raising public awareness for a mobilized unit, support Family Support group needs, and provide a host of other support to include use of facilities at the Legion post as needed. In my Legion we have contractors to help the families in case of emergency, we have accountants to assist in Tax preparation, we have former soldiers and their spouses that have been through mobilizations as well. The Legion and VFW are local to where the families reside and are very oriented to support family needs. Many of our members are former Military members and understand the significant sacrifice and service the soldiers and their families provide to our country.

I don’t know if this is a Reserve Component initiative or the masterful concept by this one unit, but it is a good idea that may warrant more focus. Imagine the synergy of Reserve and National Guard units being tied with Veteran Organizations. The Veteran’s organization gains in the supporting relationship with potential membership contacts, a direct portal to focus soldier and veteran’s support activities, and community involvement and exposure.

In our case we accepted the opportunity offered to contribute support to this Reserve unit. It was an easy decision for us as we have members in Guard and Reserve units that are in various stages of mobilization and active service. I think there is potential in this concept for the support of Family Support Groups to be encouraged to a greater degree.
Posted by Stan68ar No comments: