Women in the Army Beginning Oct. 20 through Nov. 14, the U.S. Army will honor the achievements of its women warriors as part of a three-week “Celebration of Women in the Army.” The commemoration coincides with the anniversary of the full integration of women into the Army for 30 years, with the disestablishment of the Women’s Army Corps by former President Jimmy Carter.

Throughout the U.S. Army's history, women soldiers have proven they are equal to any task...and when their country calls, they respond as U.S. Army Soldiers with distinction.

There is no difference in ability of women soldiers in today’s army. Over the years I had the opportunity to serve with some great examples of soldiering – exhibited by women and men alike. I also have a daughter that chose to serve in the Army and I’m proud of her capabilities as a soldier as well. In fact, there are many that I should personally thank for their capabilities and service to country.

I thought it fitting to note the Army’s honor for these soldiers. Hopefully each is thanked for their contributions.
Posted by Stan68ar No comments:

I read with interest about the stand up of the 99th RSC (Regional Support Command). This unit is commanded by MG William “Bill” Monk III (a former boss of mine in the 78th Division). The article described the ceremony in which MG Monk assumes command responsibility for the new RSC - the first of four RSCs which were consolidated from 10 RRCs under Army Reserve transformation initiatives. I respect the capabilities of this General Officer and I’m sure he will do well in this assignment. He said

"Today marks a major milestone in the mission success of realigning the Army Reserve…With this ceremony we take another major step in making Army Reserve transformation a reality, and put another building block in place to transform our force from a Cold War strategic reserve to a well-trained operational force that compliments the Army across the full spectrum of capabilities.

Well the sentiment that the times are changing for the Reserve Component is not new. The fact that the First RSC is stood up replacing the largely administrative ARCOM and RRC is interesting.

The 99th RSC is focused on the new mission - base operations. Prior to the disestablishments of the RRCs, they had significant command and control and support missions for assigned units within their areas of operation and geo-boundaries. The RSC now has diminished, minimal C2, and instead is primarily responsible for facilities management of all Army Reserve facilities within the Northeast Region.

The mission of training soldiers falls more now on active duty soldiers in First Army and the resulting improvements in equipping, training and resources are a result of newly directed attention on the Operational Reserve Forces being rendered. Its unfortunate that many of the RRCs never were credited with getting the force as far as they did with little in the way of support and resources…. Now we have a better rounded reserve and active force structure.

On a totally un-related note – received an E-Mail from another former Boss today – seems he is getting promoted to Brigadier General and he invited me to his ceremony. If I liked the guy or thought he was totally honest with me when we were associated, I’d mention his name…but he probably did me the favor of ending any hope of promotion with an unexplained performance plan ding which eventually gave me the push to leave the Reserves. We’ll just leave it there for now.
Posted by Stan68ar No comments: 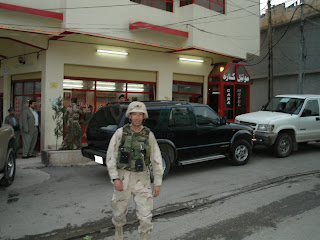 Got a letter from a fellow soldier and Friend – “Sully” who remained in the Reserves and has subsequently been redeployed to Iraq. He sent me a note the other day with an update on the changes in Iraq and MNSTC-I sine we first arrived there in September 2004.

Talking about you yesterday so had to write. One of my teams found a few conex's full of electrical equipment, new construction stuff, so I contacted the local 20th Engineer Brigade, a fairly massive unit which is the MiTT for the Iraqi Engineers, and sent an email to their commander to find out if any of his Battalions could use the stuff before it gets destroyed. Turns out its Duke DeLuca!

I'm commanding a Task Force which consists entirely of 100 US Airforce personnel who go FOB to FOB cleaning up excess material, vehicles, supplies, weapons, and whatnot. It is simple command but pays two college tuitions, plus I'm at my leisure to travel as I wish, but only by air! Quite a different tour than our last.

Our last tour we traveled by unarmored SUV to start then gradually received armored HUMMVs. Sully and I were very well traveled in country due to our assignments. About MNSTC-I

Did you know MNSTC-I now has 15 general officers!!! Phoenix base is one of only two bases in the Green Zone by year's end (plus the new Embassy Complex) and has its own housing, mess hall, and every building is 2 stories plus! Hardly recognizable. The Phoenix base actually extends to include the liberty pool in its compound! Our old housing is all gone. The green zone should be no more by early next year. Life sure is different. Take care.

Yes life is different – We had 3 Generals in MNSTC-I when we were there. One being LTG Petreaus at the time now there are 15 billets…wow!! The Green Zone was pretty extensive and definitely rustic as compared to accommodations at Victory Base. We were the outpost in the middle of Baghdad at the time.

I have since retired after my return and a last assignment to Hurricane Katrina cleanup. I have a daughter over in Iraq now…I have taken a cheerleader/ armchair quarterback position now. In that light the note from Sully made me reflect that there are still thousands of individual contributions being made with little fanfare in Iraq and I’d thought I’d offer a glimpse into this one.
Posted by Stan68ar No comments:

Its been a while since I updated you on BB’s status. She is back in Iraq with her unit after her R&R. She called us recently to tell us that she has been promoted to Specialist 4 (E-4) rank. She is glad about the promotion, and very pleased with it all.

Spec 4, Speedy 4, and other terms provide some insight to the grade – as found in Wikopedia

In deference to the original rating of Specialist 4, the modern day rank of Specialist is also sometimes known as "SpecFour." Slang terms for the rank of Specialist include "E-4 Mafia," indicating a reference to the large number of soldiers of E-4 rank who see their roles as performing the "grunt work" in the army. The Mafia reference is derived from some Specialists who are in positions to do favors for other Army specialists, such as supply administration specialists, but sometimes do not show equal generosity to senior enlisted, officers, or privates. The rank of Specialist is sometimes called a "Sham Shield": E-4s are the most experienced of the lower ranks and have usually figured out how to "sham" out of details. A specialist is sometimes ironically called a "full bird private", a play on "full bird colonel." During the Vietnam era, a Specialist 5 would sometimes refer to himself as a "Private E-5" to indicate that his duties and privileges were not different from what they had been when he was a private.


So now Specialist BB is working the overnight shift Currently 0000hrs to 1400hrs so she doesn’t have much free time. She is settled into new accommodations and has made it her home away from home.

The Army has been good for her, she has matured tremendously but of course she still is my little girl .
Posted by Stan68ar No comments: