Wanting to be there

I was approached the other day by a former National Guard soldier that was deployed about the same time as I in 2005. This soldier was deployed to an overseas assignment with his unit which by all accounts did a great job in their assignment. He was telling me that he has also since retired and has recently found out that his unit is now being sent to Iraq. The purpose of the discussion coming from him was related to his feelings of concern for the soldiers he served with previously that now will be departing for another operation without him.

It was clear that he was somewhat in turmoil and distraught at the thought that the young soldiers were somehow going to be cheated by the lack of his efforts in this deployment. It was almost as if he was no longer in the race anymore like a stallion in the paddock looking out at the track and unable to trot the course. He expressed a desire to somehow join what I would describe as a young man’s effort, but knew that is not possible for him anymore.

Its really not so curious how this former NCO had come to view his soldiers as his personal charge over years of dedicated service. The sad part of the conversation was that he and I sat and reminisced about we accomplished in molding our soldiers to be able to take on the roles they now face in their deployment. That in and of itself is an Army process that repeats itself innumerable times at all organizations. The life of a soldier from rookie private of Lieutenant to mid grade leader to senior leader and all of the sudden – on the outside swelling with pride and sadness that your soldiers can carry on so efficiently without you. The mark of success I suppose, but still doesn’t make the departure of our own any easier.

Now somewhere, there stands the man
His duty o'er and won
The world will ne'er forget him
To him we say, "Well done."
from Old Soldiers Never Die
(Gene Autry, William Burch and Carl Cotner)

Seen this several times before - still agree with its basic tenor - invokes a laugh.

"Dear Civilians, "We know that the current state of affairs in our great nation has many civilians up in arms and excited to join the military. For those of you who can't join, you can still lend a hand. Here are a few of the areas where we would like your assistance:

(1) The next time you see an adult talking (or wearing a hat) during the playing of the National Anthem---kick their ass.

(2) When you witness, firsthand, someone burning the American Flag in protest---kick their ass.

(3) Regardless of the rank they held while they served, pay the highest amount of respect to all veterans. If you see anyone doing otherwise, quietly pull them aside and explain how these veterans fought for the very freedom they bask in every second. Enlighten them on the many sacrifices these veterans made to make this Nation great. Then hold them down while a disabled veteran kicks their ass.

(4) (GUYS) if you were never in the military, DO NOT pretend that you were. Wearing battle dress uniforms (BDUs), telling others that you used to be "Special Forces," and collecting GI Joe memorabilia might have been okay when you were seven years old. Now, it will only make you look stupid and get your ass kicked.

(5) Next time you come across an Air Force member, do not ask them, "Do you fly a jet?" Not everyone in the Air Force is a pilot. Such ignorance deserves an ass kicking (children are exempt).

(6) If you witness someone calling the US Coast Guard 'non-military', inform them of their mistake---and kick their ass.

(7) Next time Old Glory (the US flag) prances by during a parade, get on your damn feet and pay homage to her by placing your hand over your heart. Quietly thank the military member or veteran lucky enough to be carrying her---of course, failure to do either of those could earn you a severe ass kicking.

(8) Don't try to discuss politics with a military member or a veteran. We are Americans, and we all bleed the same, regardless of our party affiliation. Our Chain of Command is to include our Commander-In-Chief (C in C). The President (for those who didn't know) is our C in C regardless of political party. We have no inside track on what happens inside those big important buildings where all those representatives meet. All we know is that when those civilian representatives screw up the situation, they call upon the military to go straighten it out. If you keep asking us the same stupid questions repeatedly, you will get your ass kicked!

(9) 'Your mama wears combat boots' never made sense to me---stop saying it! If she did, she would most likely be a vet and therefore, could kick your ass!

(10) Bin Laden and the Taliban are not Communists, so stop saying 'Let's go kill those Commies! And stop asking us where he is! Crystal balls are not standard issue in the military. That reminds me- --if you see anyone calling those damn psychic phone numbers, let me know, so I can go kick their ass.

(11) 'Flyboy' (Air Force), 'Jarhead' (Marines), 'Grunt' (Army), 'Squid' (Navy), 'Puddle Jumpers' (Coast Guard), etc., are terms of endearment we use describing each other. Unless you are a service member or vet, you have not earned the right to use them. That could get your ass kicked.

(12) Last, but not least, whether or not you become a member of the military, support our troops and their families. Every Thanksgiving and religious holiday that you enjoy with family and friends, please remember that there are literally thousands of sailors and troops far from home wishing they could be with their families. Thank God for our military and the sacrifices they make every day. Without them, our country would get its ass kicked."


"It is the soldier, not the reporter who has given us the freedom of the press.

"It is the soldier, not the poet, who has given us the freedom of speech.

"It is the soldier, not the campus organizer, who gives us the freedom to demonstrate.

"It is the soldier who salutes the flag, who serves beneath the flag, and whose coffin is draped by the flag, who allows the protester to burn the flag."

"If you can read this, thank a teacher"

"If you are reading it in English, thank a veteran."

"The U.S. Constitution doesn't guarantee happiness, only the pursuit of it. You have to catch up to it yourself." - Benjamin Franklin
Posted by Stan68ar 2 comments: 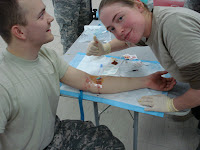 The following is extracted from Army Regulation 350-1 , Army Training and Education , 9 April 2003 .

… Immediate, far-forward medical care is essential on a widely dispersed and fluid battlefield to prevent soldiers from dying of wounds. Medical personnel may not be able to reach and apply lifesaving measures to all wounded soldiers in a timely manner. The combat lifesaver is a nonmedical soldier trained to provide lifesaving measures beyond the level of self-aid or buddy-aid. A properly trained combat lifesaver is capable of stabilizing many types of casualties and can slow the deterioration of a wounded soldier’s condition until medical personnel arrive. Functioning as a combat lifesaver is a secondary mission undertaken when the tactical situation permits.

The Army has added Combat Lifesaver training for most soldiers deploying including the soldier that appears in the picture above. The skills include Casualty Excavation, Airway Management, Chest Injury management, Controlling Bleeding, IV therapy (as seen here) and requesting Medical Evacuation.

From the response I received from the soldier pictured, it is a sobering training event that reinforces the reality that the soldiers are deploying to a hostile environment. The initiative to train soldiers in combat lifesaver skills is beneficial in the end as lives are saved.

To me the picture and knowledge of the training are indicators of the difference in the lives of soldiers and civilians. The 19 Year old soldier in the picture has friends that are most concerned with Shopping Mall sales, clothes and material things while the young soldier must learn how to save a life in a combat zone. The dichotomy between lives for todays soldiers, especially citizen soldiers has never been so significant as it is today.
Posted by Stan68ar 1 comment: