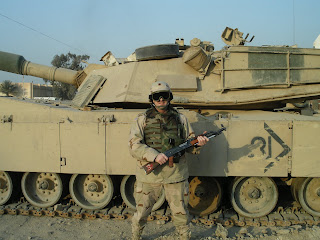 The big news in some Army circles is the decision by Defense Secretary Robert Gates to submit a budget that kills Army plans for the FCS program combat vehicles. Reading the news it looks like the Army has spent about $14 billion in research and development costs for the FCS vehicle fleet and, yes there is little in the way of actual vehicles to show for the effort. What we have seen and should have inherently known was that these vehicles were thinned skinned due to light force proponents setting requirements for FCS in the past.

The Army has been down this path before…a shift of priorities based upon the influence of a few …In the Army, there has been a gradual but decided push prior to OIF for a light force. M1s and Bradley’s where considered too heavy and hard to support for future conflicts…after all, the Army would need to quickly deploy to a hot spot and get out with minimum effort. Planning for vehicles and structures reflected this mindset.

Fast Forward to today… what we Tankers have been expressing in vain for years is now looking more like reality. We still need platforms that are reasonably durable in sustained operations, capable of protecting the crews inside and able to complete the mission. The M1 tank platform developed in the last Heavy Force era of the 70s remains the battlefield equipment in use 40 years later. (The B-52 Bomber comes to mind as a parallel piece of equipment with the Air Force)

I anticipate that the M1 in its several variants (M1IP, M1A1, M1A2 SEP &SA) will enjoy something of a renaissance…perhaps now the current force can get some development funding for long sought needs to further improve the platform we have until we sort out the force we want. I suggest some sort of crew compartment auxiliary power and air conditioning (heating and cooling) package. An electronics Fire Control package that is smaller (nano tech) and provides more capability. GPS, FBCB2 next generation, and improved comms gear should round out the vehicle nicely.

Gates' action reflects a bold initiative to take pause in designing weapons systems. He has shown a strong capability to challenge the failure to incorporate knowledge about improvised explosive devices — which have accounted for at least half of troop deaths in Iraq and are a growing menace in Afghanistan. I wish his efforts success for future programs.
Posted by Stan68ar

Thanks for sharing this extremely interesting information. I could never drive a tsnk. Keep up the good work.