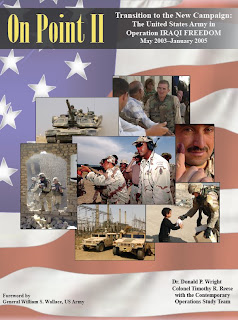 I found this account of the 98th Division Action in support of MNSTC-I in 2004-2005. Its interesting to see how Historians have begun to record our actions in that period as well as see the perspective of what we knew was a significant challenge...I think we can take a sense of pride in the effort.

In the late summer and fall of 2004, the first group of advisors drawn from a US Army unit (as opposed to advisors drawn from individual volunteers or selectees) began to arrive in Iraq. Most of them were from the 98th Division (Institutional Training) or DIVIT, nicknamed the “Iroquois Warriors.”154 These Army Reserve Soldiers were cadres of senior NCOs and officers who in peacetime ran training schools and individual training programs for USAR and National Guard Soldiers. Major General James Helmly, chief of the USAR in 2003 and 2004, had begun studying the idea of deploying elements of a DIVIT in the late fall of 2003. Initially, the USAR, the Army G3, and the 98th Division discussed creating an organization known as the Foreign Army-Training Assistance Command (FA-TRAC) to conduct the mission. This organization would deploy to Iraq and provide the permanent command and control structure for other units and Soldiers involved in the ISF training program. Other Soldiers would form the ASTs that would conduct the training of Iraqi soldiers and mentoring of Iraqi units.

The training of foreign forces was not the designated mission for USAR institutional training divisions, and the Army never implemented the FA-TRAC concept because the establishment of MNSTC-I made it unnecessary. But Helmly tried hard to convince leaders on his own staff as well as those in the Department of the Army that the USAR could conduct the mission.155 The Army National Guard had assumed the mission of providing trainers for the Afghan Army training program in the summer of 2003, and Helmly admitted some institutional rivalry affected the process.156 To move the USAR closer to the point where it could play a major role in training the ISF, in May 2004 Helmly told Major General Bruce E. Robinson, commanding general of the 98th Division, to begin preparing for the mission.

The USAR proposed the concept of employing its units to man much of the new MNSTC-I organization to Lieutenant General Petraeus in the Pentagon on 2 June 2004, just days before he took command in Iraq. Petraeus approved the concept for further study. After a mission analysis by the 98th’s staff, a more complete plan was briefed to Major General Helmly on 15 June, and then to the Army G3, Lieutenant General Richard Cody, who approved it on 18 June 2004. Brigadier General Richard Sherlock, the assistant division commander of the 98th Division, and others in the USAR and 98th Division understood the mission to involve the establishment of training academies and individual training programs for the NIA at several locations. They also understood that the 98th would deploy a task-organized piece of the division that would be attached to MNSTC-I for the mission.157 The leaders of the 98th Division, however, found that more specific information about the details of the program was hard to come by in the Pentagon, especially because the inauguration of MNSTC-I focused attention and resources elsewhere.

Without a complete understanding of their mission, senior members of the division left for Iraq hoping to begin preparations for the arrival of their Soldiers. Colonel Frank Cipolla, a commander for an engineer basic training brigade in the division, led a three-man team to Iraq a week later as the advance party. Sherlock and nine others joined them for a reconnaissance and analysis of the mission from mid-July to early August. During their trip, the 98th’s leaders discovered that MNSTC-I already had a command and control structure in place and needed individuals, not units, to man that structure. They also learned that the 98th’s mission would begin with training new recruits and units, but that the division’s Soldiers assigned to the ASTs would stay with their Iraqi units after they graduated and became operational. This was a surprise and represented a dramatic increase in the scope of the mission for the 98th because it expanded their role from simply preparing new soldiers during their initial training to advising them in combat.158

Between late 2004 and late 2005 approximately 900 Soldiers of the 98th Division served in MNSTC-I as members of the command’s staff, as school instructors, and as advisors to Iraqi units. Iroquois Soldiers manned 31 of the first 39 ASTs envisioned for the initial three divisions of the Iraqi Army, the others were manned by the Marines and some by Coalition nations.159 Before deploying, these Reservists attended stateside training at Camp Atterbury, Indiana, to prepare for the mission. Many of them considered the training to be of limited value as the Army and the Atterbury trainers themselves were unfamiliar with the mission for which they were preparing the Iroquois Soldiers to perform. On arrival in Kuwait, they completed some theater-specific training before moving into Iraq; this training was more focused and useful.160 Once part of MNSTC-I, the members of the 98th Division worked through the growing pains of becoming comfortable with the enlarged scope of their mission. Some of them also endured open skepticism from Active Duty counterparts about their ability to do the advisory mission.161 The AST members met their new Iraqi recruits in basic training, trained with them to develop individual and unit skills, and then accompanied them after graduation on operational missions in 2005.

While they lacked the tactical experience of Soldiers from Active and National Guard combat units, Petraeus credited the Soldiers of the 98th Division with providing a much needed boost to MNSTC-I due to their expertise with building and operating the institutional training systems of a modern army. Although their experience was in training individual soldiers in a school setting, most Soldiers of the 98th Division made the transition to combat advisors successfully. They steadily developed tactical competence as they trained with their Iraqi units and then deployed with them into combat.162 For some in the division, it was obvious they had accepted a mission for which their previous experience had not prepared them, and a few had difficulty transitioning to the demands of advising units in combat. Still, the great majority adapted and felt they had shown how the USAR Soldier could meet the complex challenges posed by the Iraqi operational environment. Indeed, a large number of advisors from the 98th Division went into combat with their Iraqi units in major operations like AL FAJR in the city of Fallujah in November 2004.163 Command Sergeant Major Milt Newsome, who served in Iraq with the division in 2004–2005, expressed the pride felt by the Iroquois Warriors on their return, stating, “I’m very proud to be a member of the 98th Division because history will realize what the 98th Division and all those who supported us had to do, and did. . . . When all the ashes settle, you’ll see the silhouette of the 98th Division and you can say it was a job well done.164

As a result of the lessons learned in the fall of 2004, MNF-I and MNSTC-I began making major improvements to the advisor training and support programs. These changes took place outside the timeframe of this book, but they help highlight the challenges faced by the 98th Division and other Soldiers who were part of this initial wave of advisors. One of the first steps was to improve stateside mobilization training in early 2005. MNSTC-I also established the Phoenix Academy at Taji in early 2005 to provide a 10-day course conducted by members of the 98th Division focused on the latest tactics, techniques, and procedures (TTP) used by existing advisor teams. In the spring of 2005 the Coalition also changed its term for unit advisor teams from AST to Military Transition Teams (MiTT) to better reflect their mission. Finally, MNSTC-I established the Iraqi Assistance Group in April 2005 to provide better command, control, and logistical support to US advisors working with Iraqi units after they transitioned from training under MNSTC-I control to the operational control of units in the MNC-I, the Coalition’s tactical command.

Soldiers in the next wave of advisors, for which the USAR’s 80th DIVIT formed the core, benefited from these improvements. But they too faced new challenges. The first wave of advisors had linked up with and trained their Iraqi units when they were first formed; thus, they were able to develop personal relationships with their Iraqi counterparts before conducting operations. Many advisors in the next wave reported to Iraqi units already in combat. Their learning curve was steep and time to build cohesion and trust was almost nonexistent. The Army continued in 2005 to find the right mix of training, personnel, techniques, and processes for advising the ISF.