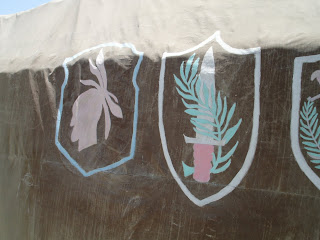 Found an Article about the 98th Division’s deployment to Iraq. (This is the unit I deployed with in Sep 2004) This deployment was discussed as a pivotal and sea state change deployment for the Army Reserve by the USAR Commander at the time LTG James R. Helmly.

As a side note -I had the opportunity to work for General Helmly when he was the 78th Division Commander where I was the senior Civilian for the 1st Brigade at the time. He was a no nonsense commander that worked thru all obstacles. I recall staff meetings where he regularly dammed the bureaucracy and insisted on getting tasks done quickly.

Here is some of the Combat Studies Institutes interview with LTG Helmly as it related to our deployment:

When the 98th Division (Institutional Training) deployed to Iraq in 2004-2005, Major General James R. Helmly was the chief of Army Reserve and commanding general of United States Army Reserve Command. In this interview, focusing on the 98th’s deployment and conduct of its Iraqi Army training and advisory mission and related larger issues, Helmly relates how early on he saw a need to reconstitute the Iraqi forces, a chronic shortage of US Special Forces to train them, and thought to himself, “Why can’t we use our table of distribution and allowances organized institutional training divisions and training support divisions?” The biggest problem he encountered in developing this idea was actually resident in his own staff. “That is, they kept coming back with the schoolbook answer. So we had a ‘Come to Jesus’ meeting one day and I slammed the door and said to them, ‘Goddamn it! Let me make it abundantly clear what we’re going to do….You could sort of see the eyes opening on these guys and they finally understood.” After the concept was briefed and accepted, Helmly states that another group of problems arose from “this bastardized system of request for forces (RFF). Instead of being given
a mission or a task with commander’s intent and then allowing the units to generate the capability,” he explained, “we went to a bastardized thing off the back of some sloppy envelope for an RFF that was frankly just very cumbersome. It really tied our hands in terms of the flexibility of putting together a task organized unit of the 98th.” As the deployment of the 98th to Iraq proceeded, its employment varied considerably from his original concept. According to Helmly, “My original initiative was to use them in a training base capacity inside a foreign army…. What occurred, though, was that many of the 98th became embedded trainers inside Iraqi units.” Even so, he added, “the 98th soldiers did all very well and I admire and respect them greatly for that.” Helmly also notes that Iraq has focused the US Army on details, that the needs of “the long war” have been neglected, that the current method of foreign military sales and assistance is broken, and that an organization dedicated to training foreign militaries needs to exist. What’s more, personal agendas and institutional inertia contribute to these challenges.

With regard to the 98th Division deployment – LTG Helmly was asked what happened after the unit was deployed:

General Helmly: I visualized the FA-TRAC deploying and establishing a deployed version of an institutional training base. I saw us establishing a Fort Benning, Georgia or a Fort Knox, Kentucky inside Iraq and training civilians to become soldiers. What occurred, though, was that many of the 98th became embedded trainers inside Iraqi units. When I was a young private, when my unit was completing basic combat training it was announced that one of the drill sergeants I had was going to deploy as a platoon sergeant to Vietnam. A couple years later, I learned he had been killed – and he had been a very fine noncommissioned officer (NCO). The point of this is: everyone knows that the ultimate objective of any soldier is to engage in ground combat, but I thought the 98th would essentially do a training base kind of thing. But what actually happened was that many of these outstanding soldiers found themselves embedded inside Iraqi units. As a result, there were several who were killed or wounded in action who were operating more or less as advisors rather than trainers in a training base capacity. Had I known that, I wouldn’t have argued against using the 98th, but I would have understood things better from the beginning. My original initiative was to use them in a training base capacity inside a foreign army. After all, one of the things we’ve learned in this war is that clerks, cooks and truck drivers all have to be prepared to fight as infantrymen. I have to say, though, that the 98th soldiers did it all very well and I admire and respect them greatly for that.

The entire interview is fascinating reading – anyone with an interest in the workings at the Department of Army Level in 2004 and the revolutionary deployment of a training unit to the warzone to train and support the Iraqi Army under LTG Petraeus will want to scan the document found here. http://cgsc.cdmhost.com/cdm4/item_viewer.php?CISOROOT=/p4013coll13&CISOPTR=333&CISOBOX=1&REC=7

Interviewer: The first part was your assessment of the 98th’s experience and performance over there.

LTG Helmly: I think due to the ability, willingness and courage of the individual soldier and small groups of soldiers, it was a success. That is the cornerstone of success. It proved we could take an organization that was not designed to deploy, put it into a significantly different set of conditions, and the small units and lower-ranking leaders would cause it to succeed. I think they added great capability and I was extremely impressed with them. It’s a tremendous group of soldiers. I saw many of them off before they left and they were positive. There wasn’t any talk of why they had to go do this mission. Of course they harbored their own personal fears as individual soldiers, but they were very proud. By the way, people tend to put stereotypes on things. A lot of people said we were just weekend warriors and things like that. Well, a lot of that first group of the 98th that deployed were drill sergeants and officers who had a lot of active duty time and commanded MTOE formations. They were really a high-speed group of capable and professional leaders. They were excited about the ability to buy into training and building up the Iraqi Army. Nobody was awarded the Congressional Medal of Honor but there were a lot of heroes out there who didn’t get accorded that honor but who were nonetheless heroes in their own right. They suffered some pretty serious casualties. It was some really significant and outstanding history.